Franz Fischnaller : Here, switch to another project, because in this possibility of doing… I’m learning a lot of Leonardo da Vinci because he’s my master somehow, because he was exactly to what he did in the 15th century, what we are trying to do nowadays, only that he had different technologies, but he tried.

For example, “The Last Supper” painting is nothing else and a hologram. So we made a big research on that and I tried to get into the painting, make the visitor… this is a virtual reality application.

The people can really, in 8K virtual reality, on projection on 19 meters by 9 meters, they can get into this immersive environment so they can interact, they can zoom into the painting, they get the different viewpoints of what Leonardo was tricking in the perspective because he basically brought the visitors optically into the height of the horizon, which is 4,5m high.

So we are basically bringing this into virtual reality. So here we can see, for example, we made also gigapixels. I am working with a company which is making all these pictures and they are pioneers in this field today in Italy.

So, here, the visitors can explore the different viewpoints and how Leonardo da Vinci has conceived the 3D room in the back. So he basically, in the painting, has exactly done this concept and we reconstructed all this. I worked with scientists, with historians and people who are in this field.

And so we reconstruct all these things. We also have experts, and we speak about the theory of Alberti, which was what I am using to measure the perspective, because it’s a sort of a grid that I move in interactive way and I can exactly measure and exactly control that the painting is exactly in the perspective correct.

I was lucky I could climb up to the painting, I could touch the painting – that was wonderful. And I could see that where the central point is, there you find a hole where Leonardo da Vinci has put a needle and he put strings to measure out exactly the whole thing.

So that’s how I did construct it. Unfortunately, I don’t show you the video here.

And this is how we construct. And doing this I found out that if I put exactly the 45 degree reflection on the mirror, I get exactly the reaction of a hologram effect.

And I found out that one of them have a hand with a knife. Basically the hand of the knife is one of the tricks of Leonardo da Vinci. I don’t give you the answer, but this is one of a trick that he is playing with the people, and this is how it goes. 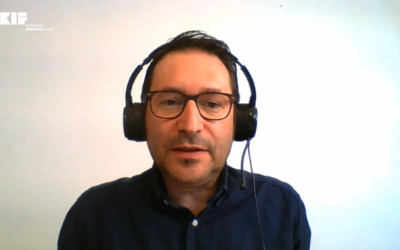 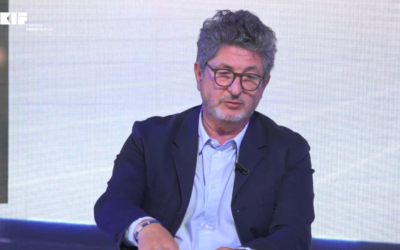 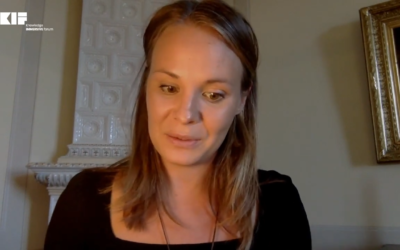